One of the easiest ways to clearly perceive the state of community life in contemporary urban neighborhoods (and America at large for that matter) is to simply take note of the various annual Thanksgiving day high school football games. Once an important community event that spoke directly to the reality of a shared local consciousness and sense of belonging, these games now barely register on the cultural map.
Because of the now pervasive ‘gentrified’ mindset, a mindset rooted in the signifiers produced by the marketing and branding mechanisms of global capitalism versus embodied local reality, the cultural foreclosure of these Thanksgiving day games is actually seen as a positive development in certain gentrified urban neighborhoods; as a  sign of progress representing an overcoming of primitive urban rivalries and passions that are felt to have no place in contemporary urban living.
In a certain respect, we could even make the provocative claim that gentrification silently mock these games, questions their utility and derides their folksy simplicity.
But what this all too typical attitude of ideological arrogance completely fails to see is that the passion and intensity these games once evoked brought forth a highly sophisticated network of community relations and social-symbolic resonance that gentrification is fundamentally unable to produce in the present.
In other words, when you understand why local Thanksgiving day football games have progressively lost their cultural power, you can also understand why the local artist or musician have likewise lost their ability to capture and communicate the essence of  community life. And, furthermore, why local politicians are increasingly perceived as helpless to enact any real change, why middle and working class families can no longer afford to live in urban neighborhoods, and at the extreme – why opiate addiction is tearing through the very fabric of American society.
What my claim rests upon is that something as simple and banal as the decline of the high school football game is actually deeply symptomatic of a culture in crisis, of a culture that is now unable to produce local subjectivities, meaning, in the age of 21st century neoliberal globalization.
The following passage is from my recently published book, ´Conversations on Gentrification´ where I speak about the (once) famous East Boston/South Boston Thanksgiving football rivalry. Interestingly enough, I feel that the history of this game, and the fact that is entirely irrelevant today, is particularly revealing in attempting to grasp the general trajectory of gentrification in Boston and the effect it has had upon neighborhood sensibility:
And then of course there is the deeper work, which is to reimagine the idea of what it even means to be an urban citizen in the 21st century. One of the things that I think would be helpful — especially in a city such as Boston — would be trying to rehabilitate a sense of neighborhood consciousness. And when I say that, I certainly don’t mean trying to rehabilitate the old modes of neighborhood consciousness. I’m speaking of something entirely New. In other words, what has to happen is that we have to reimagine what the urban neighborhood can look like that simultaneously rejects both gentrification and this nostalgic retreat back toward the unreachable past.
You now see the absolute wrong way to do this in South Boston: they are trying rename it “Sobo” — a shameless homage to the yuppies. But this is by no means a genuine reimagining of a shared neighborhood consciousness, this is a marketing slogan at best. What I am speaking about is a reawakening of the intersubjective texture that lives and breathes within an urban neighborhood, that which gives an urban community a narrative structure and a shared sense of meaning. This is what is desperately needed today to combat the psychological aggression of neoliberal globalization. It’s funny, but I claim that one of the best things that could happen to Boston in the future would be, for example, that if in 20 years something like the famous rivalry  between the South Boston and East Boston high school football teams was to be reactivated. Something like this: re-opening these neighborhood rivalries with new stories, new families, and new children.
But to the sensibilities of gentrification this seems like the worst possible idea. ¨The Eastie/Southie football? God no!¨ For gentrification, even the mention of this game seems  anachronistic, reactionary, and something entirely against the notion of contemporary urban progress. But this is precisely where we encounter the important question: why would gentrification find this idea — the Eastie/Southie football game — so deeply offensive? Because it considers football a dangerous sport for children to play? Maybe. I can concede that. But I actually think it’s really something else that gentrification would never admit.
You see, what we are ultimately dealing with here is an awakening of a neighborhood cosnsciousness that is expressed through a football game; an awakening of the pubic dimension, an awakening of the things that we share in common completely free from capitalist mediation. Gentrification cannot stomach this because the whole point of gentrification is to turn individuals into abstract consumers that ruthlessly compete against each other on the mirco level. The example of the Eastie/Southie football game — and I used that example intentionally — is something that has absolutely nothing to do with this kind of logic …
When I say, “Let’s bring back the Eastie/Southie football game,” I’m by no means saying “Let’s bring back the Irish/Italian ethnic rivalry that was once expressed through a high school football game.” What I’m saying is that we have to reinvent these neighborhoods — not with cute marketing slogans and gentrified advertising to ‘brand’ them correctly so developers will invest there — but away from the gentrified horizon itself so that new a sense of shared identity can come forth. 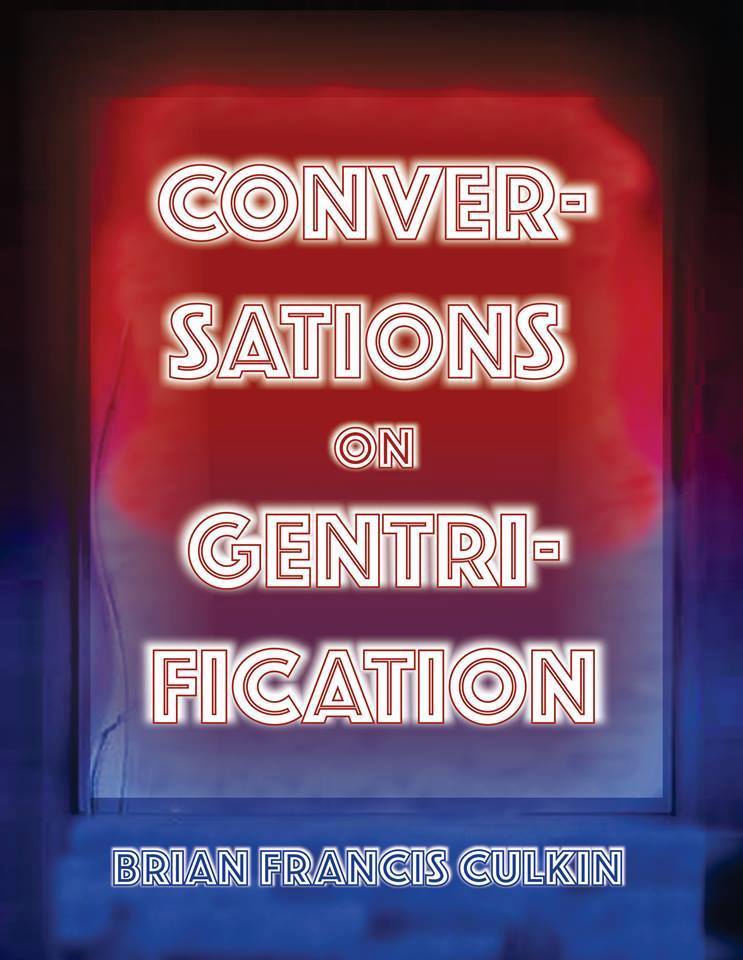 ´Conversations on Gentrification´ is now available for purchase.

You can order book here